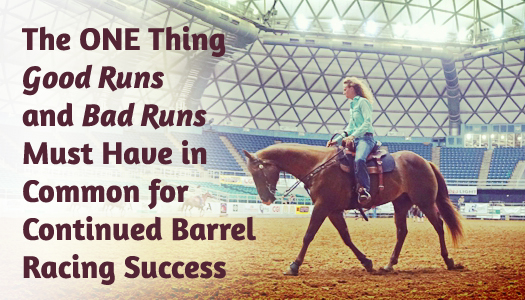 When I made the second run back on my gelding Pistol several weeks ago, after a FIVE year break from competing (and SEVEN months of re-conditioning) due to an injury, the overwhelming feelings I experienced were ones I won’t soon forget.

While it wasn’t exactly an arena record, the run felt solid and we clocked at the top of the 3D against more than a couple hundred of the best barrel racers in Texas – not too shabby I figured, considering I wasn’t sure he’d return to running barrels AT ALL!

I was pretty excited, and as Pistol and caught our breath, I turned and locked eyes with my hubby (and videographer) who was walking toward us with the same excited and grateful smirk on his face.

It was really satisfying and rewarding to realize Pistol’s comeback wasn’t just a possibility, but was REAL – and I KNEW that a solid (near 2D) run was a starting place we could build on.

Well, fast forward to the weekend before last, when we were up in slack at a local pro rodeo. We’d made the most of our runs in between, and were MORE THAN ready. In fact, Pistol was SO ready that he sailed right on past the first barrel… WAY past.

Of course I was initially concerned (and a little shocked), thinking to myself – “Huh… Isn’t that interesting!?” But the best part is that when Craig and I met up and locked eyes again afterward – we both had THE SAME GRIN as when Pistol and I’d made a really nice run.

Now looking back, I can see there were several factors that contributed to us going “bye-bye” (there are REASONS these things happen – see links below!), but none of them that weren’t fixable!

In fact, having a horse that’s fresh and running hard (albeit in a way that was temporarily a little less mindful and connected) isn’t ALL bad – it’s just that tweaks must be made for balance to be restored.

says “Life inflicts the same setbacks and tragedies on the optimist as the pessimist, but the optimist weathers them better.”

The truth is – THAT rodeo was just one of many tests that provided feedback. Without valuable feedback, we don’t get the information we need to keep improving and getting better.

Unless you want to stay stuck just where you are and not grow, the “learning runs” are just as important as the “winning runs.”

In fact, with the right perspective – “learning runs” ARE “winning runs!”

Even the world’s best barrel racers tend to experience more “learning” than actual “winning,” so this is a wise attitude to adopt.

I shared our “winning run” on Instagram, so if you’re not already following along there, join me @barrelracertips.

And OMG, that is SO fitting.

It IS awesome… every. single. bit. of the highs and lows and wins and challenges. (If YOU ever need to break out of a funk, click here to listen to this fun and silly song from the LEGO’s movie.)

The bottom line is that I’m in this for the long haul with my gelding Pistol, so although I DO put the very best preparation into our runs, having a healthy, balanced perspective means that I do NOT put ALL my hopes and dreams into ONE run or rodeo – it doesn’t define us, our talent, ability, future or potential.

I’ve had him since he was a two year old and even though he’s now a teenager, we’re still building a FUTURE together. How we handle this run and this moment, influences the next.

When you think about the BIG PICTURE, there is so much more… more rodeos, more success, more important things than our momentary and superficial struggles, etc. – it’s small stuff.

There will be more runs, and they will be better! We can CHOOSE to be encouraged by how CLOSE we are to our goals vs. how far away we are.

The question is – Which “GAP” will you focus on?

The meaning we give our results is totally up to us. As long as we’re using and applying what we LEARN, every mistake or “bad run” (if there IS such a thing!?) actually gets us closer – allowing us to “fail fast” and make our dreams come true even sooner.

The other option – having a negative emotional response, or choosing NOT to analyze and learn from a “poor performance,” or giving it a disempowering meaning, often leads to unfair treatment of our horses, snarky comments to loved ones, and a general ungrateful attitude at best, and essentially stagnation that does NOT facilitate the breakthroughs that truly get us where we want to go.

In today’s often cynical world, this may come across as “Pollyannish” and to that I say – HECK YEAH!

Robb Hilman said, “I don’t think Pollyanna was simple and naïve to reality. I think she was a badass who bent reality to her will. Optimism isn’t lazy, it’s a fierce battle of consciously choosing the perspective that best serves you.”

A run that didn’t go as planned is not the end of the world, it’s simply an indicator that an adjustment is necessary. It’s an arrow pointing us in the direction we need to go.

As we strategize and regroup, we don’t have to feel as though we HAVE to go back to the drawing board, but that we GET to… that in itself is really a gift, because with the right lens – the training and the journey is part of the fun, too.

Every mistake is one we never have to make again. So get EXCITED about those less than stellar runs – they are how we learn, and are a necessary part of our advancement!

Study them, embrace them, celebrate them, be grateful for them and the education they provide, then move on and use them to make changes, and look forward to the even better runs in your future that are coming as a result – THAT is how real, lasting success is EARNED and sustained in the long run.

Lastly, remember Robert Brault’s definition of an optimist “Someone that knows that taking a step backward after taking a step forward is not a disaster, it’s a cha-cha.”

Sounds like something a certain barrel horse I know needs to do at the first barrel! 😉

Barrel Racing Exercises (for Smooth, Fast Turns) are Useless, Unless…

A Barrel Racer’s Guide to Understanding and Creating Impulsion

Teachings from Tess – Eleven Life Lessons from My Best Four-Legged Fr... Be Ready for Anything with 16 Barrel Racing Boot Bag Necessities
Scroll to top