Listen to this article in audio form! It’s #9 on the Barrel Racing Tips podcast.
For the latest episodes subscribe on iTunes, Spotify, Stitcher or Google Play. 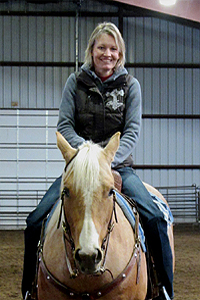 What was different, was that each individual student received instruction on how to walk the pattern properly, one approach, turn and exit at a time.  Next, they did just that (repeatedly), while NFR barrel racer Jane Melby, and her husband Ryan critiqued and made corrections to the way they RODE the pattern based on how they WALKED it.

I was aware of the way in which our horses tend to mirror our own bodies when we ride them.  Until I had an opportunity to walk the pattern with Jane, however, I was NOT aware of the numerous, subtle ways in which my body was out of position in a run, and how that became obvious by how I walked.

The realization that I stepped into turns with my inside hip leading, made total sense of why my horse sometimes struggled at the first barrel.  If his body mirrored mine – how could he be in good position for an easy turn?  On the second barrel, the way in which I started turning my own body too soon, totally correlated with how my horse also starts the turn there a bit too soon.  And that funky little move my gelding tends to make on the back of the third barrel?  YEP.  ME – Guilty!

Like any other time I’ve had a major AHA moment on my barrel racing and horsemanship journey, I couldn’t help but do a little “happy dance” inside, as I just KNEW I had made a HUGE step in my awareness that would translate into even greater success in competition.  There may not have actually been a light bulb shining above my head, but trust me – I was glowing.
END_OF_DOCUMENT_TOKEN_TO_BE_REPLACED