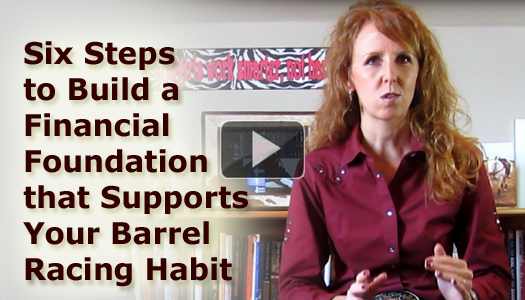 Listen to this post in audio form! It’s #159 on the Barrel Racing Tips podcast.
For the latest episodes subscribe on iTunes, Spotify, TuneIn, Stitcher or Google Play.

One of the first memories I have relating to finances was thinking I would never be able to go to college because “we didn’t have the money.”

But that was a lie. Well, part of it…

It’s true that my family didn’t seem to have enough funds to meet even our most basic needs at times when I was growing up. It was the way of thinking I inherited as a youngster (and later changed) that was drastically inaccurate.

I DID go to college and get a degree in Veterinary Technology, albeit on my own dime. Whether I continued to assume that my life was doomed – OR that I could or couldn’t influence my future, was up to me.

Today there are a lot of adults still not living their barrel racing dreams because they have no hope – believing that being a professional barrel racer is only for people with “a lot of money.” Today, let’s blow that false belief outta the water too, shall we?

I won’t argue that making a run for the NFR for example, does indeed require hefty financial backing (see below for actual examples). But if barrel racing professionally is your goal, it’s time to get real and get busy creating the strong financial foundation to support it.

The truth is that “not having money” is a temporary condition!

When it exists long term, this type of limitation exists more so in our minds than anywhere else. Just like every other challenge before us (there will be plenty!) – if we want something bad enough we must be brave enough to face the truth, learn, and take responsibility for changing our circumstances and overcoming obstacles along the way.

There are also a lot of barrel racers making consistent, honest efforts who are relatively aware of what it takes to make NFR dreams come true, yet just can’t seem to get ahead.

This may be because they still aren’t quite making the actual efforts and looking hard enough at reality to realize how the action steps they ARE taking aren’t the actual steps necessary to reach their intended destination.

If the preceding example is one of “no hope,” this is one of “false hope.”

Today, I want to take hope out of the equation entirely and share SIX concrete steps to map out an effective plan for firming up another aspect of the foundation that high-level barrel racing depends on.

#1. Get Real About Your Goals
If you’re waiting to get “discovered,” marry a sugar daddy, get signed on by a big sponsor, or think you’re gonna support yourself with winnings, think again!

Her (2015) trip to the National Finals Rodeo had started more than a year before.

DuPerier went to 100 rodeos in the 2014 season, the maximum allowed by the Women’s Pro Rodeo Association. She finished third in the Rookie of the Year contest and was 25th in the world (with earnings of $44,804), but fell short of being invited to the National Finals Rodeo, which takes just the top 15 in each event — those who have won the most money during the year.

To reach Vegas this year (in 2015), duPerier set a grueling pace that took her away from home for nearly two straight months at times. She competed in 87 rodeos and won $166,923, coming into the finals with the second most winnings of all rodeo competitors…

DuPerier cobbled together the winnings in small and big chunks — from $519.58 in Redding, California, to $8,437 in St. Paul, Oregon, and $9,100 in Houston. But the winnings came at a price, both financial and emotional.

Trip duPerier estimated that qualifying for Vegas cost at least $120,000 in fuel, vet bills, travel, entry fees, and hiring a good driver to at times help them haul horses thousands of miles. “Most girls will spend $60,000 to get to Vegas. Whatever they win there is what they make,” he said. 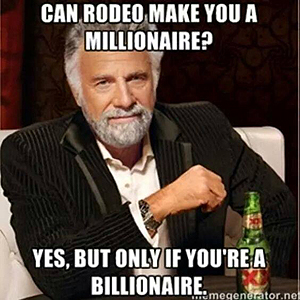 No exaggeration – so plan for it!

If you have an NFR qualification in sight, you can plan on needing to earn at least $60,000 and will likely spend at least that amount in expenses.

The average regular season winnings between the top 15 was $97,210. So it’s likely that the more you win, the more you will have traveled and the greater your expenses will be. To sum it up – if you’re one of the nation’s top barrel racers, you’ll be doing well to just break even.

But we need experience to get good, right? While it’s true that we have to spend money to make money – first, we need to have money!

Whether you’re disheartened or motivated by these stats, you’ll benefit from steps #2-6 I’ve shared in the video below:

Considering that pro-level barrel racing is a 24/7 – 365 day a year, all-consuming job that doesn’t leave time for much else, when trying to catch a glimpse of exactly “How they do it?” (make a living and balance it all!) – I wanted to share some of my behind the scenes understandings and observations:

So there are some answers to the question “HOW DO THEY DO IT!?” Obviously, there are a lot of the things mentioned above that we don’t ANY part of! I’m particular about the WAY I go about achieving my goals and I know you are too.

The good news is that if you’re smart and savvy, I’m confident your dreams are within reach. There WILL no doubt be mistakes made and lessons learned, and LOTS of sacrifice, but if we play our cards right – those sacrifices don’t have to be negative or permanent.

Here’s a great interview from Marie Forleo with best-selling author David Bach (42 minutes but worth the watch):
How to Live and Finish Rich

And let’s not forget it all requires a lot of hard work:

To get started on working YOUR personal plan, RIGHT-CLICK HERE then select SAVE LINK AS (or Open in a New Tab to view and print) to save your computer, then open and print your Financial Freedom FUNSheet where I’ve listed all six steps with an area for making notes and mapping out your to-do’s!

How are you feeling after taking all this in?

Lets hear your questions, concerns, “AH-HAs” and/or experiences below!

Also follow the links below for even more resources related to today’s topic:

Why and How to Detox Your Barrel Horse for a Fresh, FAST Start in the New Y... 101 Quick Tips to Improve Your Riding on the Barrel Pattern
Scroll to top
X