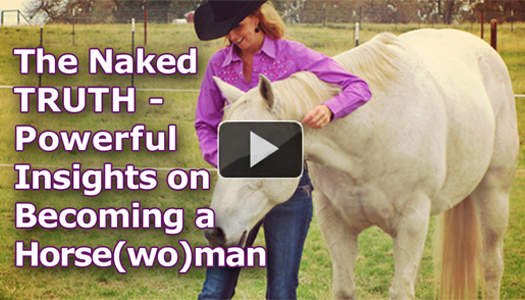 In 2013 I turned my barrel horse gelding out, and turned my husband’s rope horse “loose.”

In Part II of my three-part Becoming a Horse(wo)man Series below, I’ve shared what that meant, and what it continues to mean in my own life and that of every horse I touch!

When I say I “turned him loose,” I mean that I focused on developing him at liberty.

To be “at liberty,” essentially means that the horse is at liberty to leave at any time – with no reins, lines or tack to stop them. As it turned out, this was a challenging area for both of us. In fact, I was having serious doubts just before one major breakthrough resulted in finally mastering flying lead changes – the epitome of my goals for us.

I will say that working at liberty and even riding bridleless had always intrigued me. I’ve always felt as though doing so really spoke for the horse/rider relationship.

Having enjoyed working colts free in the round pen, I was naturally drawn to learning more (and admittedly a little over-confident). Accomplishing my goals with Dot Com at liberty ended up being one of the most challenging (and rewarding) things he OR I could ever do.

“Every positive change–every jump to a higher level of energy and awareness–involves a rite of passage. Each time to ascend to a higher rung on the ladder of personal evolution, we must go through a period of discomfort, of initiation. I have never found an exception.” – Dan Millman

As a finished pro-level head horse, Dot Com came to us in need of some mental/emotional balancing. Even as a reserve world champion team roper with very quiet hands and great concern for his equine partners, my husband struggled with him in the box. However, our intention was not to just “get by,” but really acknowledge his issues for what they were – and completely work through them.

If you’ve been following BarrelRacingTips.com for a while, you may already be familiar with Dot Com’s impulsion and anxiety issues, as they have been the subject of several articles on creating relaxation and quality movement.

In this article, I’m excited to share more about what’s involved with working at liberty, why it’s beneficial to both horse and rider, as well as details about my humbling mistakes, our victories, and what we learned along the way.

Understanding the benefits and purpose of working at liberty starts with understanding that horses very naturally seek connection. In nature, their survival depends on it. A herd of horses behave similarly to a school of fish – there is comfort and safety in groups. To mirror the feelings and actions of their herd members is part of how horses are wired. When they aren’t feeling threatened, it’s very natural for them to show interest in connecting with humans. 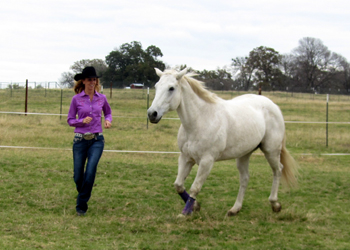 Horses communicate with each other through body language – we can learn to read them and communicate better with them (even in the saddle) by paying close attention to how they position their bodies, right down to the intricacies of their facial expressions. The better we learn to “speak horse,” the better we’ll be able to do EVERYTHING with horses – including (and especially) barrel racing!

One of the most natural ways to “speak their language” and communicate with them is on the ground – just as another horse would. It’s a great place to build and refine the foundation that carries over under saddle.

My intention for developing Dot Com at liberty was not only to deepen my own horsemanship skills. I also figured that if I could create calm connection and responsiveness without any lines, ropes, reins or tack in a wide open pasture, then perhaps it would help him in becoming more mentally centered in general – especially when we did have the support of such tools. In addition, I firmly believe that any type of cross training is beneficial to the speed event horse, but especially one like Dot Com.

Before I go much further, in order to bust any potential misconceptions, I’ll say that when it comes to liberty (or anything we do with our horses), that there is a difference between operating with feel and having your horse just respond to a cue. In all reality, we really need both. Without feel, you have a trick horse – a horse that may be able to do some neat looking, fancy stuff, however without a true connection there will always be something lacking.

For example, there is likely to be a slight delay in response at times, or a horse might start offering what he’s been trained to do, whether he’s really been asked for that or not – in other words, take over. If you have feel, but no education, a horse won’t really build up the movement patterns and physical and mental conditioning to perform certain maneuvers with complete confidence, power, ease and athleticism.

One reason why I’m not automatically impressed with any ol’ demonstration of bridleless riding or liberty is that a lot of it portrays an illusion of feel. It’s possible to have a “circus horse” operate and respond with FEEL, and a highly developed western performance “trick horse” that doesn’t.

It’s easier and more common than you might expect, even for barrel racers, to fall toward the “trick horse” extreme. When we do this, we’re barking orders at our horses more so than having a two way conversation. There is so much more to horse training, than “horse training!” It’s not so much WHAT we’re doing with our horse, but HOW.

When playing at liberty with feel for example, it’s possible for me to draw my horse to me, or drive my horse away from me quickly and smoothly in a split second just by changing the energy in my body and leaning my torso forward or back – which is not a trick, but a horse that’s been developed to respond to me via feel. (I want my horse’s to respond when I raise or lower the life in my body while in the saddle also.)

It can all look very similar, and there can be a fine line between the two at times, but with feel, you have a horse that is connected to you and willing and able to move anywhere you ask, at any time because you’re engaging in a real-time two conversation, you’ve built a language rather than having a mechanically “trained” horse waiting for a certain cue. With feel, there is greater opportunity for harmony and unity, with harmony and unity there is greater opportunity for precision at speed.

In a sense, horses are born knowing how to communicate like this but unfortunately, a lot of people inadvertently teach a horse NOT to “Feel of, feel for, and feel together.” – Ray Hunt

If so, you’ll enjoy the articles below: