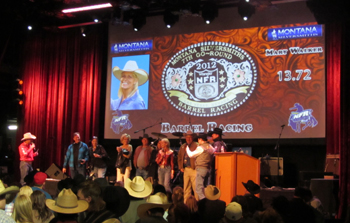 Mary Walker accepting her buckle after winning the 7th round.

At 53 years young, Mary Walker’s dream came true in 2012 when she qualified for the Wrangler National Finals Rodeo.

She wowed the crowds as she and her gelding, “Latte” won four rounds, set a new WNFR earnings record, won the WPRA best dressed award, the Top Gun award for a new Ram truck, and utimately the 2012 Barrel Racing World Champtionship.

Mary has overcome adversity and inspired thousands on her road to the WNFR. In April of 2011, Mary and her husband, Byron lost their 21 year old son Reagon in an auto accident. Only two months later Latte fell on her at a rodeo – shattering her pelvis, fracturing her back and requiring numerous plates, screws and months of rehab.

If you’re a barrel racer with dreams of making the NFR, Mary’s story is one that will inspire you to ask “What’s my excuse!?” Triumph really can come from tragedy and Mary is testimony to that.

I had the pleasure of catching up with Mary at the Wrangler National Finals Rodeo. We talked horse care, alley strategy, tipped barrels and more… it became obvious that Mary is not only an inspiration, and a great barrel racer, but a world class lady.

Seven Tips to Solve Gate Problems for Good
Making it BIG in Vegas – with NFR Barrel Racing Rookie, Cayla Melby Small
Discover and Develop the Horse Power You Need to Succeed!
Should I Take on a Barrel Horse with Issues?
Free Your Barrel Horse from Emotions that Hold Back Athletic Potential
NFR Warm Up – Get to Know the 2018 Top 15 Barrel Racing Qualifiers
How to Start Your Rides and Runs Right!
How to Evaluate, Find and Enhance Saddle Fit for Faster Barrel Racing
1 reply