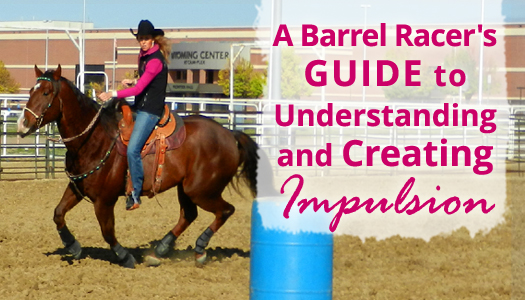 Listen to this article in audio form! It’s #4 on the Barrel Racing Tips podcast.
For the latest episodes subscribe on iTunes, Spotify, Stitcher or Google Play.

Next to collection, it could very possibly be one of the most misunderstood and often missing, but critical pieces to any performance endeavor with horses.

I went in-depth to cover the subject of collection in another post (see link below), but make no mistake, these two go hand in hand. Although they are equally important when it comes to developing a winning barrel horse, impulsion is at the top of the priority list.

Another describes impulsion as the “pushing power (thrust) of a horse, which comes from his desire to move powerfully forward with energy.”

However, there is one similarity and one difference in the above definitions that I would like to call attention to.

First, the similarity – FORWARD. It seems that many think of impulsion as a forward-only motion.

So then is it impossible to have impulsion when backing? What about lateral (sideways) movements? Hmmm… I can think of numerous examples where impulsion is necessary for a quality maneuvers that involve traveling in directions other than forward.

Next, the difference – one definition states that impulsion is generated from the hindquarters, the other states that the power “comes from his desire…” 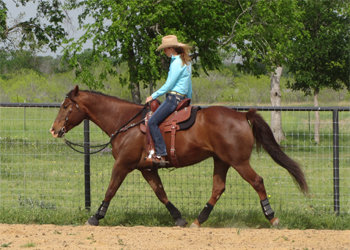 Use your position to enhance and encourage power from the hindquarters.

So if one were to dissect these definitions, we could consider that both are correct and that perhaps impulsion is in fact physically generated from the hindquarters but that the desire to move powerfully with energy is not only an important part of the equation but a prerequisite.

Our horses must have a reason or motivation to deliver the impulsion we ask for.

In line with this idea, yet another definition of impulsion is “The measure of a horse’s response with respect to the rider’s cues.” This is essentially saying that impulsion is not the responsiveness itself, but the measure of it. Simply put, the more response to a cue, the more impulsion we have, whether that energy is directed up, down, forward, backward or sideways.

For anyone with big goals set on performance events (especially barrel racing), impulsion is not only desirable but necessary.

When horse responds in a timely fashion to cues with power generated from the hind quarters, it makes any athletic maneuver smoother, and more efficient and correct. When using their body like a spring to respond with respect to their rider, a horse is prepared to be anywhere, at any moment.

Minus impulsion a horse’s movements are delayed, flat, heavy, and lacking suspension. Whether you’re cutting a cow, turning a barrel, or performing passage – without impulsion, these maneuvers become much more difficult for the horse to perform.

Applying gradually increasing pressure as necessary and then a well timed release is an effective way to create or add to the level of impulsion in your horse’s movements. It’s important to remember however, that a horse will never respond to a cue lighter than that which you first apply.

For example if your horse has a solid foundation in his development and you’d like to increase the degree of impulsion in his movement you might start out by bringing up your energy to ask for forward movement, then add light leg pressure and then tap your leg or his rear with a rein. Increase the pressure quickly but evenly and release instantly when you get the impulsion you’re looking for.

When first introducing this concept to a horse, you’ll use more repetition and allow for more time to pass during the increase in pressure. As always, however, when utilizing this principle, you’ll want to release as quickly as possible. For example, the increase in pressure can take place in as little as one second or as long as ten seconds, depending on your horse’s level of education.

These steps will create impulsion by helping your horse understand how to better utilize his body in response to your cues and will also apply to backing and lateral movements. There are plenty of individuals out there who would suggest some bit and spur therapy for an impulsive or unmotivated horse. There are ways, however to help a horse of either extreme to naturally want to drive forward or gather themselves and rate or stop.

To keep our horses fresh and enjoying their job it would be worthwhile to spend a few riding sessions on this concept, especially if you find your horse on either end of the spectrum.

I mentioned above that impulsion is considered ‘the measure of a horse’s response to the riders cues,’ in any direction (forward, back, sideways, even up and down) so this applies to the degree of ‘go AND whoa’ our horse has.

For a horse with a tendency toward ‘go,’ spend several sessions (between four to seven is ideal) focusing on small circles. For the horse with more ‘whoa’ keep the circles to a minimum and try incorporating long, straight lines into your ride. Get out of the arena and head for the hills if you can! Doing so gives each of these types natural motivation to do what you want (through shortening or lengthening), which equals less frustration and seeming need for mechanical devices.

These techniques help create a balanced level of “all natural” motivation, for which the result will be even higher quality impulsion and powerful maneuvers. This is because an authentic desire to move powerfully forward will be generated in your horse’s mind instead of only being created artificially through the body.

Remember – “Horses will run faster and jump higher out of heart and desire!”

Describing how to achieve such an important piece of the horsemanship puzzle that requires such a high degree of FEEL is no doubt a challenge.

After instilling or brushing up on your horse’s education, he’ll better understand how to utilize his powerful hindquarters in respect to your cues.

Keep in mind that an equally important ingredient for impulsion is giving your horse the gift of natural motivation by making your idea, his idea.

It’s likely that you will be pleasantly surprised to see how these concepts can make a positive difference on the barrel pattern.

Barrel racing success requires impulsion and I hope this article will help you find both.

I’d love to hear your thoughts in the comments below!

You’ll also enjoy my Critical Concepts for Creating COLLECTION post and Exercise 29 – Gather Round in The First 50 Barrel Racing Exercises to Develop a Champion book.

*Impulsion definitions for this article provided by The Enlightened Horseman Blog, Ron Meredith of the Meredith Manor Equestrian Centre and Wikipedia, the free encyclopedia.

No More Feeding Mystery – How to Balance Your Barrel Horse’s Diet...